In an Iranian oasis, rural women fight to save their village and livelihoods 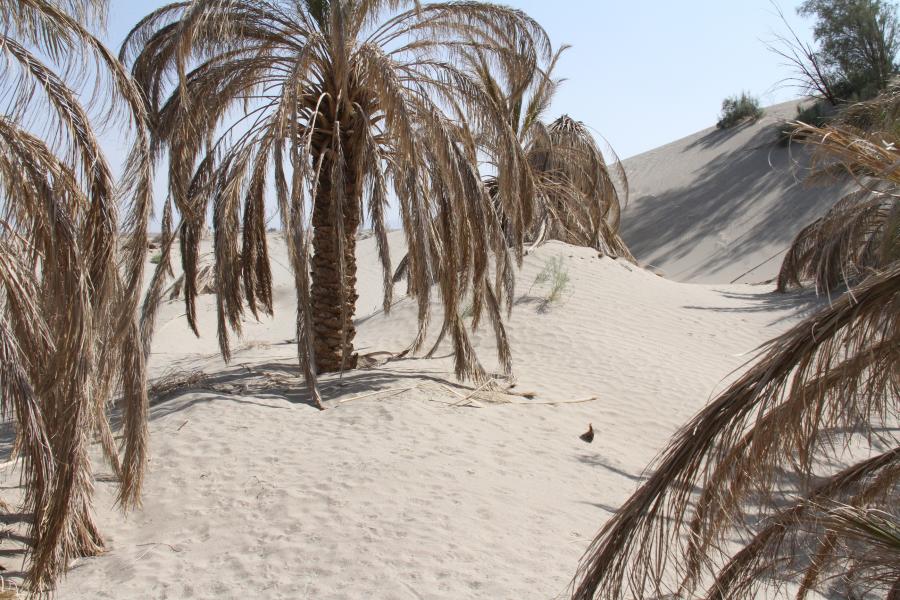 The local community is working hard to protect their village, a small oasis paradise surrounded by desert, against threats such as land degradation and sand dune encroachment.
Photo | FAO/Amir Khaleghiyan

On the eastern side of Rostam Abad Village, where Kobra Palangi’s family lives, the land is being sieged by advancing sand dunes. “If we do not stop the sand movement, my date palms will be buried under the dunes,” Kobra says worriedly. Rostam Abad Village is one of the many oases scattered in the eastern part of Kerman Province in southeastern Iran.

Over the last couple of years, unprecedented droughts, primarily caused by climate change, have been a severe threat to the village. These droughts, combined with over-grazing, poor land management and inadequate vegetation, mean that this area faces huge risks of soil erosion and sand dune encroachment.

“Last year, our neighbour, an elderly man, was trapped inside his home because dunes were piled behind the door, and we had to rescue him from the back window. If dunes move further toward the village, I will lose my home and garden, and we will be displaced.”

The FAO-implemented Rehabilitation of Forest Landscapes and Degraded Land (RFLDL) project in the area has helped villagers take on this challenge. Funded by the Global Environment Facility and the Government of the Islamic Republic of Iran, the RFLDL project supports community members to form development committees in which to raise and address challenges, such as land degradation. The project has empowered residents to take part in sand fixation and land rehabilitation activities to stop the dunes.

“Authorities used to award the private contractors for planting seedlings in lands prone to wind erosion of soil,” says Ramezan Samareh Habily, the RFLDL’s senior expert in Kerman Province. “But, through the Village Resources Management and Development Committee [established by the RFLDL], the project engaged the residents to take care of this task. Villagers were awarded contracts to plant seedlings in these areas which are highly exposed to increasingly encroaching dunes.”

Planting certain species like the Moringa tree and Tamarisk shrub keep the soil in place with their roots and act as a barrier to wind, slowing both wind and soil erosion. These plants need little water and are drought-resistant, enabling them to adapt well to the area's harsh environment and protect the valuable soils in desert oases.

Kobra is one of the most active individuals in this endeavour. “I was awarded plant seedlings for 60 hectares of lands,” she states.

“Since the locals got involved in sand fixation activities conducted around their villages, we have witnessed their enthusiasm to monitor the concerned areas. They have developed a strong sense of attachment to the planted lands,” says Ramezan. He explains that, taking care of their surrounding environment and being paid to do so, the villagers have seen tangible benefits to their quality of life and income. 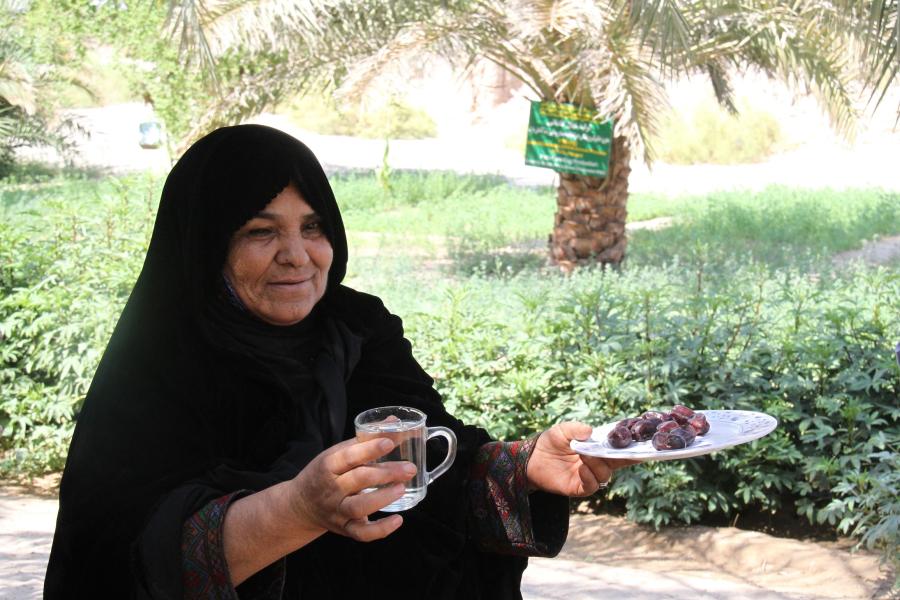 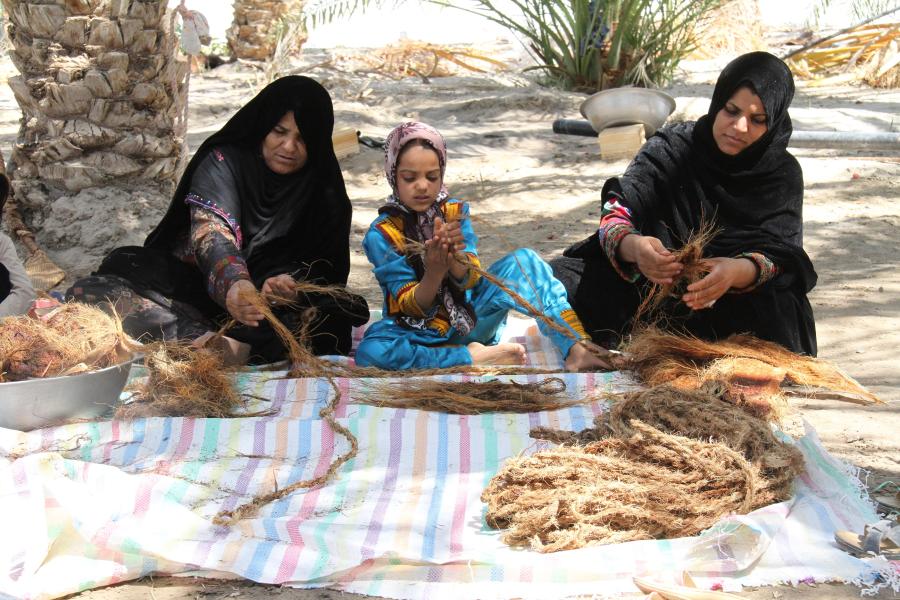 With the introduction of a Community Fund, the RFLDL helps villagers to start small businesses, such as rope-making for harvesting dates.
Photo | FAO/Amir Khaleghiyan

One way of doing this is assisting village members to organise and mobilise their financing potential through a Sustainable Community Development Fund (SCDF). This Fund gives community members, in particular women, the opportunity to take out necessary loans to start small-scale businesses.

“Each member [of SCDF] contributes to the fund every month, depending on his/her financial ability,” Kobra says.

“Before the project started, I had to work for landlords, being paid daily to harvest date palm. I had nothing: no cattle, no garden, not even a single date palm tree,” says Kobra.

“Over the last eight years and based on the loans obtained from the [SCDF], I could establish different businesses, such as rope-making from date palm fibres,” Kobra says. “We are six neighbouring women who partnered in the rope-making business.”

Making ropes from date palm fibres is a traditional and environmentally-friendly practice. Removing these fibres helps spur the growth of the trees while also reducing the risks of pests and fire. The ropes are then purchased by palm owners for harvesting quality dates. With the money the women collectively generate, they are helping support their families to meet their basic needs such as food and healthcare.

Kobra explains, “[Before, when] our kids got sick, we could not provide adequate medical treatment for them. However, now we can afford to treat our children in medical centres in case of illness.”

The local community is working hard to protect their village, a small oasis paradise surrounded by desert, against threats such as land degradation and sand dune encroachment.
Photo | FAO/Amir Khaleghiyan

Nowhere is it more obvious than in a village oasis that addressing land management issues is vital, not only to safeguard the livelihoods that locals have worked so hard to build but also to ensure the survival of the community itself. The RFLDL project works to address land degradation and soil erosion, whichin this part of Iran like in many areas of the world, pose a major threat to global food security, threaten to displace populations and, ultimately, push more people into poverty.

FAO provides countries with suitable technologies, inclusive agricultural policy advice and effective extension programmes for the sustainable management of soil to stop land degradation and soil erosion, all aimed at eradicating hunger and food insecurity and offering a decent life for rural populations. 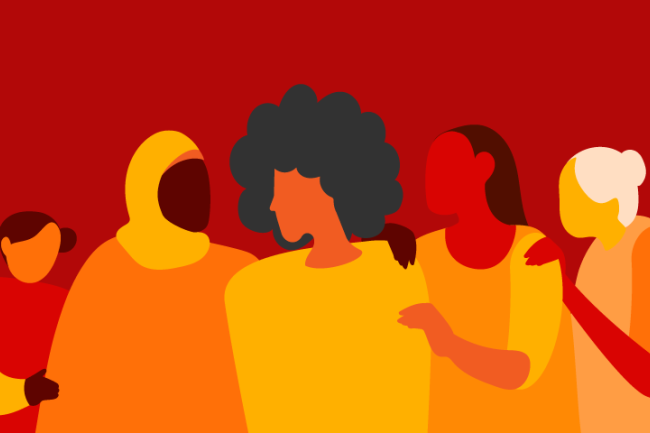 Frequently asked questions: Types of violence against women and girls

Violence against women and girls is one of the world’s most prevalent human rights violations, taking place every day, many times over, all over the world. 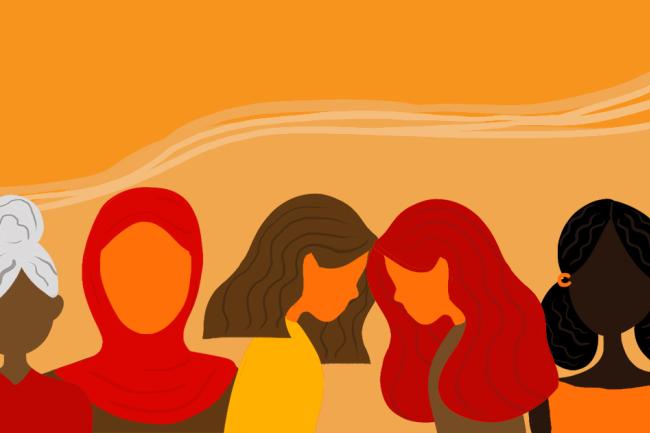 16 Days of Activism against Gender-based Violence 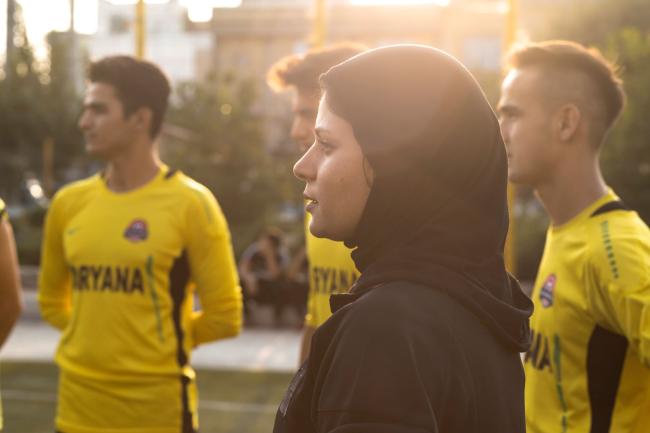